Implications of fuel stacking for cooking in Nepal 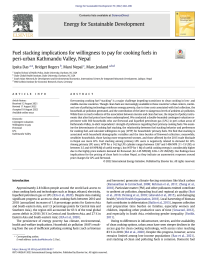 Access Publication
Overcoming cooking fuel “stacking” is a major challenge impeding transitions to clean cooking in low- and middle-income countries. Though clean fuels are increasingly available in these countries' urban centers, continued use of polluting technology reinforces energy poverty, due to time costs associated with fuel collection, the household air pollution generated, and the contribution of the latter to dangerous levels of ambient air pollution. While there is much evidence of the association between income and clean fuel use, the impacts of policy instruments that alter fuel prices have been under explored. We conducted a double-bounded contingent valuation experiment with 360 households who use firewood and liquefied petroleum gas (LPG) in peri-urban areas of Kathmandu Valley, to elicit respondents' strength of preference regarding their primary cooking fuels. We examine the determinants of cooking fuel stacking, the relationship between fuel stacking behavior and preferences for cooking fuel, and calculate willingness to pay (WTP) for households' primary fuels. We find that stacking is associated with household demographic variables and the time burden of firewood collection; meanwhile, wealthier households, those having more empowered women, and those affected by the 2015 trade blockade in Nepal use more LPG. Fuel stacking among primary LPG users is negatively related to demand for LPG. Among primary LPG users, WTP for a 14.2 kg LPG cylinder ranges between 1267 and 1496 NPR (11–15 USD, or between 3.5 and 4.9 NPR/MJ of useful energy), but WTP for 1 MJ of useful cooking energy is considerably higher due to the highly price inelastic demand for firewood (42–145 NPR/MJ, 0.36–1.25 USD/MJ). Our findings have implications for the pricing of clean fuels in urban Nepal, as they indicate an asymmetric response around price changes for LPG and firewood.
Share this:
Subscribe to our mailing List