Yating Li: Demand Assessment and Productive Use in Sierra Leone 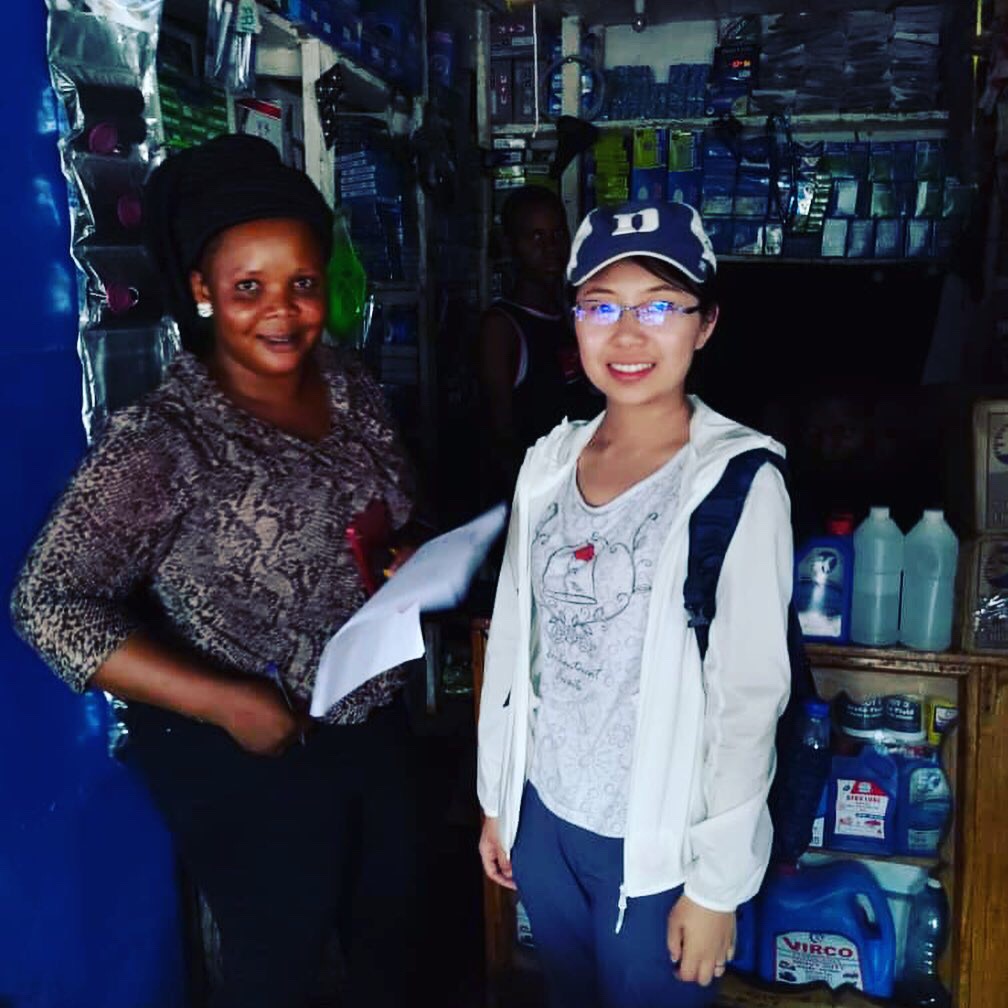 There would be no better way of concluding my journey in energy access at Duke University with the summer internship at Power Leone, the Sierra Leone subsidiary of Energicity Corp, a leading West African mini-grid company with 1.7 MW in operations or under contract.

I became interested in energy access issues while taking the Renewable and Worlds’ Poor class taught by Jim Rogers and Tim Profeta in Spring 2016. Born in China, which has nearly universal electricity access, I was shocked by the fact that more than 1 billion people lack access to electricity around the world. With the establishment of the Global Energy Access Network, I was able to continue exploring issues surrounding energy access in 2017 and to lead the efforts in bridging the academic world and practitioners through various events in 2018 as the co-president.

Before my graduation in May 2019, I ran into Jonathan Philips, the director of Energy Access Project at Duke, and expressed interests in spending my summer working with a private company in Africa. As magical and lucky as it sounds, I was immediately introduced to Nicole Poindexter, the CEO of Power Leone and found my gateway to West Africa after a few phone calls. 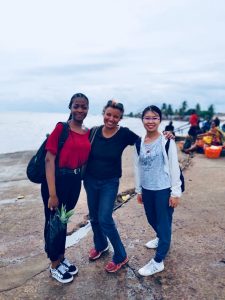 Nicole Poindexter in the middle. We were waiting to take the government ferry from our site in Petifu back to Freetown.

Working in the field offers very different perspectives from learning at an academic institute. Even though I have heard many anecdotes from practitioners that shared their experiences with students at Duke, visiting sites with the team enables me to really feel the excitements and challenges. For example, when we turn on the electricity to test the system in Petifu, Port Loko District, I felt to my heart the happiness of teenagers dancing together along the music played with speakers powered by the electricity. On the other hand, when our hired vehicle got stuck in the white clay mud on the way to a remote community in the rainy season, I learnt to appreciate the role of paved roads in solving the energy access challenges, among other enabling factors.

One challenge that I would have hardly thought about is the difficulty in transferring money from one place to another, after being brainwashed by the success stories on African countries’ leapfrogging in mobile money. As many of the current projects are at the initial stage, our customer managers visit communities to explain the services and collect connection fees. Given the communities we serve are in the provinces far from our office in Freetown, customer managers need to send the money through mobile money services for safety reasons. However, it usually takes them several attempts to find an agent that could successfully process the transaction. Many agents do not have enough credits to transfer even a few hundred dollars, which is a small amount in the business world but exceeds the annual income of most people in Sierra Leone. 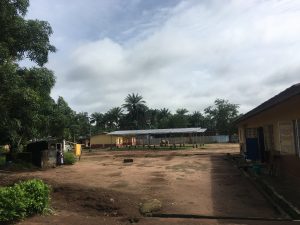 In addition to joining the team in signing up customers, performing pre-commissioning checks and conducting surveys with potential commercial users, my work mainly focuses on two areas: demand assessment and productive use.

The goal of the demand assessment workstream is to estimate electricity demand for each community that Power Leone will serve next year. This set of projects where Power Leone both construct and operate the mini-grids, together with the ongoing projects where Power Leone is wiring customers to existing panels, belong to the Rural Renewable Energy Project funded by the UK’s Department for International Development (DFID) and implemented by UNOPS.

During my PhD study at Duke, I published three papers analyzing data to understand various aspects of electricity demand in China. However, the previous experience did not get me very far in assessing the demand in Sierra Leone. With the support from different teams and insights from discussions, I was able to sketch out the approach, refine the different pieces of the model and eventually write the slides to summarize our findings.

While we were successful in conducting and finalizing the analysis, many of the obstacles we encountered and overcame reflect the challenges in estimating demand in a less developed country. 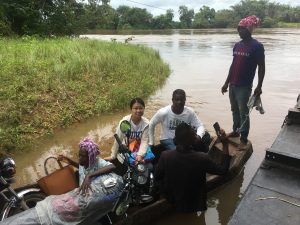 The local ferry was not operating due to high water level. We had to take a canon to cross the river to reach the community for customer sign ups.

It is widely accepted that electricity itself does not automatically lead to development. Other initiatives are necessary to induce a real impact on the local economy. From the perspective of a mini-grid operator, more productive use of power translates into higher kWh consumption. If the revenue from higher electricity consumption outweighs the cost of expanding capacity (zero if the existing capacity is enough), productive use of power would lead to higher profitability of the mini-grid operations.

Finding the opportunities for productive use, especially sustainable solutions, is not straight-forward. We start with scoping exercises where we conduct focus group discussions with local residents. It doesn’t take long to understand the potential opportunities, for example, rice mills for farmers and cold rooms for fishermen. Going beyond this basic understanding and taking actions to make these dreams come true requires much more robust studies. For example, one would need to understand the supply chain of the fishing industry in Sierra Leone to be able to decide the added value of keeping the fish fresh versus drying. As most of these processing machines require high upfront investments, a financing plan has to be provided to assist the purchase. It is then crucial to the lender (the mini-grid operator or a third party) to understand the profitability of the proposed activities, which often goes beyond the expertise of the mini-grid operators. Therefore, it is beneficial to collaborate with other institutions that specialize in relevant areas, for example, an institute that analyzes the fishing supply chain.

Take away from my experience

I have learnt a lot about the operations of solar mini-grids during my time at Power Leone and my colleagues are always very supportive. Operating mini-grids is a complicated process that requires a well-functioning team consisting of both the technical staff handling the hard connections (e.g. constructing, wiring, building and testing meters) and the customer managers building soft connections (e.g. reaching out to, educating and serving the customers). This unique set of people and skills is key to Power Leone’s success in providing affordable, reliable electricity that is powerful enough to power any household or commercial need.