The secret of the energy transition: why solar will reshape global politics (and be bad for Putin) 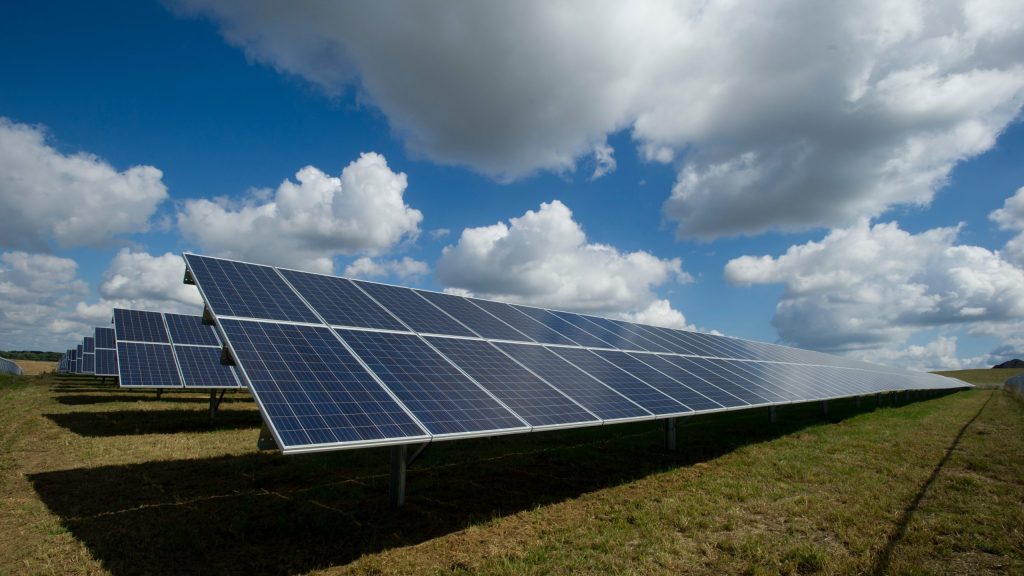 In 1893, a young German engineer, dismayed by the negative social and environmental effects of the Industrial Revolution, set out to design a new type of engine. He believed that by giving entrepreneurs a smaller, cheaper engine that outperformed the steam engine, they could compete with the large industrialists of the day. He hoped a re-distribution of energy would lead to a re-distribution of political and economic power.

The engineer’s name was Rudolf Diesel. Today, the engine that still bears his name powers millions of the small entrepreneurs that he dreamed of. However, as we know, the transition from steam engines to diesel engines did not deliver Rudolf Diesel’s larger dream of decentralization. Small diesel engines were never able to compete with larger, centralized generation on cost.

Today, many people believe that solar power, now a smaller, cheaper source of electricity than fossil-fueled power, will lead to a redistribution of energy. And, like Rudolf Diesel, they hope that will in turn lead to a redistribution of political and economic power, undermining the geopolitical power of extractive nations like Russia. Three characteristics of solar power make this dream possible. If realized, it would mean the end of wars fought for and funded by the control of energy.

The secret of the energy transition in three graphs: why solar is unlike any other energy technology

What makes solar different from all other energy technologies? Solar uniquely combines three qualities: (1) it’s ubiquitous, (2) it’s a technology not a fuel, and (3) it’s modular. The secret of the current energy transition is in how these three qualities work together to decentralize energy.

First, solar is ubiquitous. Every nation in the world receives sunlight. This is in contrast to most energy sources whose potential is concentrated in just a handful of countries. Concentration leads to centralization. Ubiquity enables decentralization.

Second, by being a technology, not a fuel, solar joins computer chips, LED lights, and TVs in becoming relentlessly cheaper as more of it is produced. Solar is already cheaper than fossil fuels at just 3.1% global electricity production. Unlike fuels, the cost of this technology is heading in one direction with scale: down.

The third quality is the most critical for decentralization – modularity. All other energy technologies perform better when built at large scale. Solar PV is unique in that it achieves almost the same energy efficiency at the scale of a single 4W solar cell, as it does at the scale of a giant 1,000MW solar farm. Economies of scale still apply, but the additional cost of transmission and distribution means small-scale, local solar can be competitive with the traditional style of centralized large-scale power generation.

Most of the world’s energy supplies are concentrated geographically. Few would be surprised to learn that OPEC members, making up 14 of the world’s 195 countries, control 80% of oil reserves. Europe and the rest of the world’s need for Russian gas makes responding effectively to Russia’s invasion of Ukraine challenging and economically painful. But resource concentration is not limited to oil and gas. 80% of the world’s onshore wind potential is held by just 13 countries. Hydropower is even more concentrated, with 80% of the world’s hydropower potential found in just 5 countries: China, Brazil, India, Canada, and Ethiopia. Egypt’s dispute with Ethiopia over its massive 5.15GW Grand Ethiopian Renaissance Dam hydropower facility is driven by the control it gives Ethiopia over vital downstream water supplies.

Solar is different. 80% of the world’s solar potential is spread across 30 countries, twice as much as any other large energy source. More remarkably, the difference between the countries with the highest solar potential (Namibia) and the lowest solar potential (Ireland) is a factor of just two. 86% of the global population lives in countries where the average daily PV potential is over 3.5 kWh/kWp, the level at which the World Bank estimates solar will meet a significant share of energy demand in the future. And even within countries, solar is relatively evenly distributed. There is no equivalent in solar for Saudi Arabia’s Ghawar Field oil reserves, or China’s Three Gorges Dam.

A world where solar is the dominant form of energy is a world where nobody controls energy.

Solar is a technology, not a fuel

Almost 90% of the lifetime cost of solar is in its upfront cost – the cost of the technology. Like most renewable energy, solar has no fuel and very low operating costs. This is in stark contrast to fossil fuels. Only 61% of a coal-powered electricity is the cost of the power plant itself, and for diesel it is just 26%.

Solar power is one of the most stunning examples of Wright’s Law ever observed. The price of solar electricity has dropped by 30-40% with each doubling of cumulative solar deployment. Our World in Data visualized this for technology-based energy sources like wind and solar, and fuel-based energy sources like coal and nuclear. They found that over the last 10 years “while solar got 89% cheaper and wind 70%, the price of electricity from coal declined by merely 2%.” 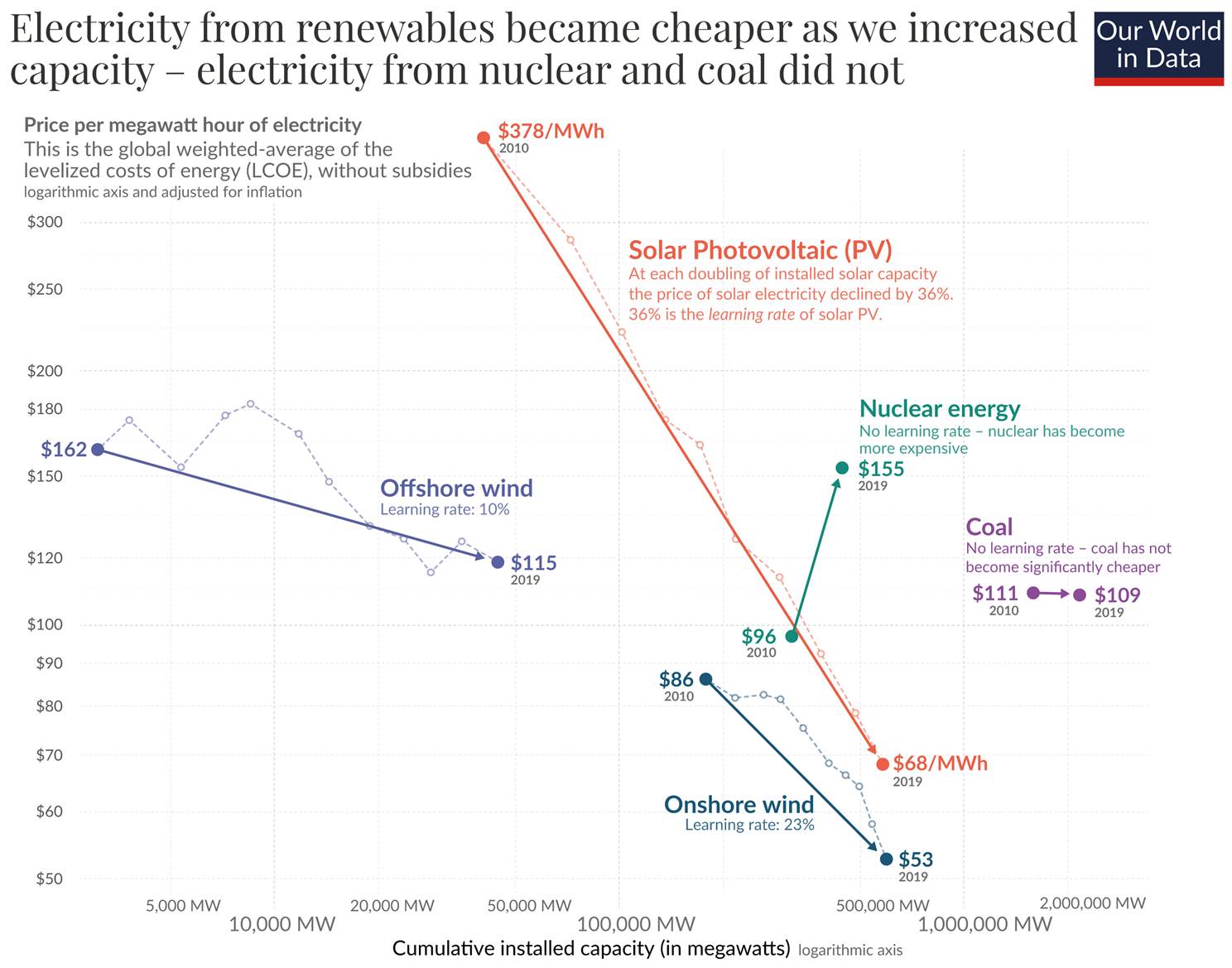 Source: Our World In Data.

One important caveat is that without a way to store the energy from solar, solar would be restricted to being an interesting blip on the world’s energy landscape. Solar PV lacks two important qualities that modern, industrialized economies require. Solar cannot deliver power on demand (most obviously at night), nor can it provide frequency stability, which electrical household appliances and industrial equipment require to operate reliably.

Fortunately, battery storage can help on both fronts. And as a technology, batteries also benefit from Wright’s Law. The price of batteries has fallen by 97% since the early 1990s.

Price and market size of lithium-ion batteries since 1992 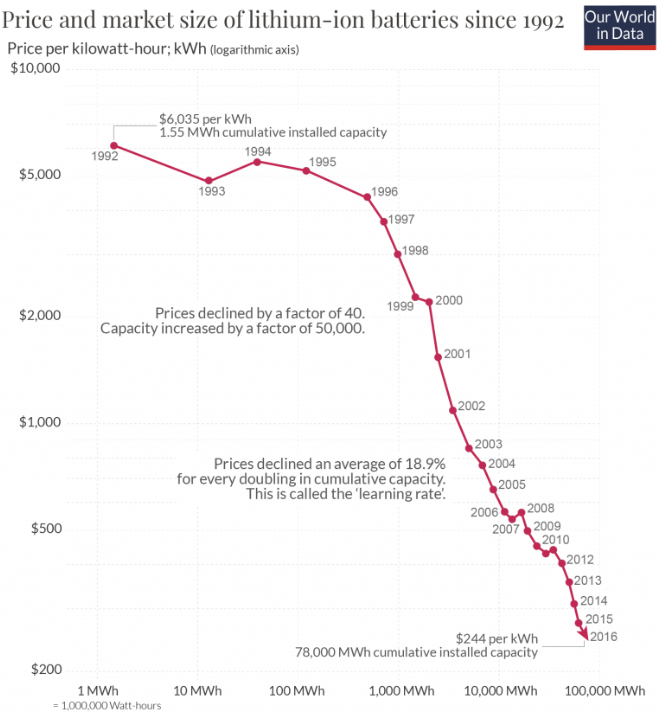 Source: Our World In Data.

It’s true that the input materials for batteries are not ubiquitous. However, the geopolitical implications are different. Fuel-based power requires input materials (e.g. gas) continuously to operate. Russia can turn off the gas tap and paralyze Europe in a matter of hours or days. Technology-based power like solar and batteries are different. Batteries can operate for years before they need replacement input materials. If the Democratic Republic of Congo (DRC) turned off the cobalt tap, it would not impact the batteries already in operation. The price of new batteries might spike, but alternative sources and substitutes could be developed over time.

For most energy technologies, bigger is better. Fuel-based technologies like diesel, gas, coal, and nuclear all deliver significantly higher efficiencies as they get larger.

This extreme modularity breaks the logic that a bigger power plant is always better than a smaller power plant. Small-scale, local solar can provide power exactly where it’s needed, under the control of the local consumers. This is a radical change in energy delivery.

Economies of scale still apply. But even though the unit cost of small-scale solar is more expensive than large-scale solar, it is also generated locally. And that saves money. The electricity on your roof only has to travel a few meters. Transporting electricity tens or hundreds of kilometres from large power plants to customers doubles the cost of that electricity in many markets. This means rooftop solar can cost twice as much as big, but distant solar plants, and still be competitive. This is not a vision of the future. It’s already true in many markets. The graph below shows small-scale, local solar is cheaper than the main grid in Kenya, Nigeria, and South Africa. 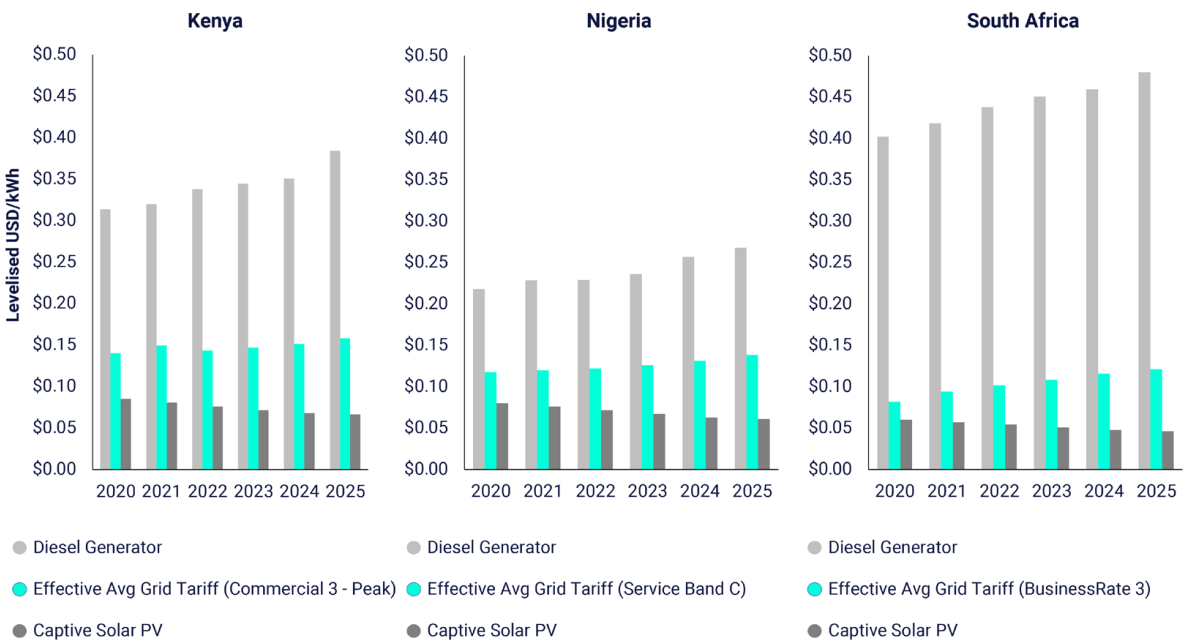 Power will decentralize from the few, to the many.

The Gulf War in 1990 was a war for the control of energy. By invading Kuwait in August 1990, Saddam Hussein doubled the crude oil reserves Iraq controlled from 10% to 20% of the world total. Taking control of 10% of the world’s energy by invading another country will no longer be possible. Putin’s invasion of Ukraine is a war funded by the control of energy. It’s estimated that Russia has been spending around $876 million per day on the invasion, sustained by oil and gas sales topping $1 billion a day.

Within nations, the modularity of solar will decrease the power of large corporations and centralized government. What the printing press and then the internet did to information, solar power does to energy. The end result is that energy will no longer be the source of geopolitical, political and economic power it is today. Solar energy may finally deliver on Rudolf Diesel’s original dream:

“Undoubtedly, the new engine can give a sounder development…than the recent trends which are false on economic, political, humanitarian, and hygienic grounds.”

Want to be notified when we publish new blog posts?