Energy Access Through Wind Turbines: My Experience With IBEKA 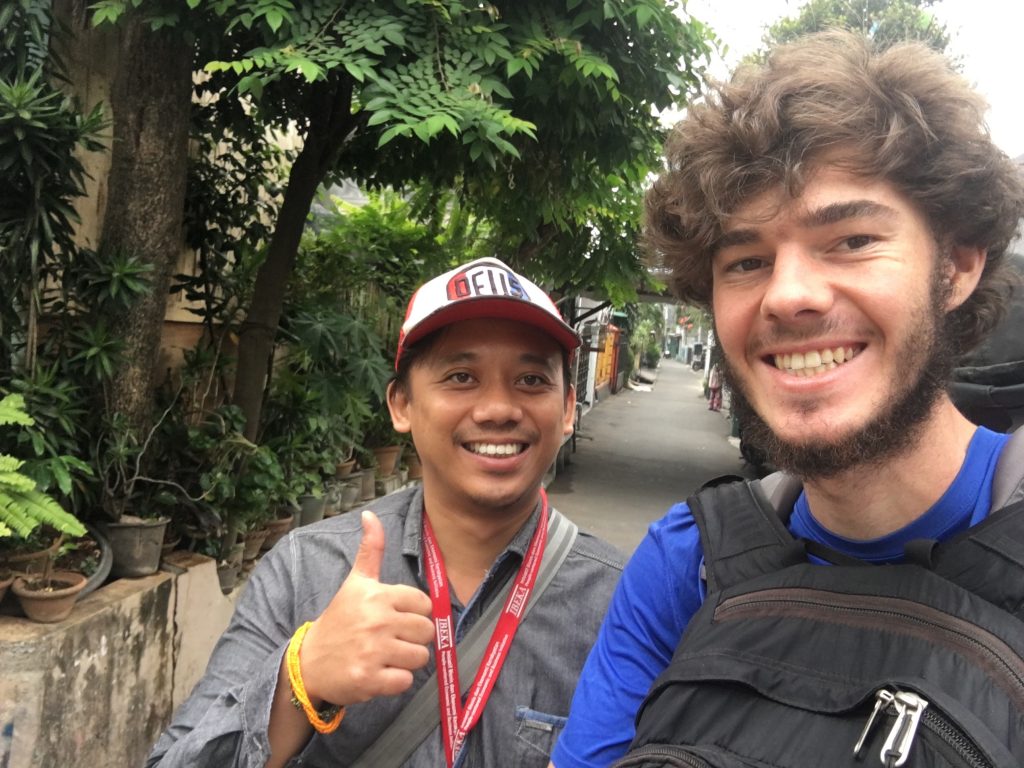 Over this past summer I worked for the non-profit IBEKA in Indonesia. IBEKA’s goal is to empower rural villages by providing them with electricity, most often in the form of a micro-hydropower plant (MHP), but sometimes also as a wind turbine farm. I wanted to work for them because I thought I would get first hand experience with constructing MHPs and understand the major problems affecting the access to electricity.

My journey began when I flew to the small island of Sumba where I was to meet my internship advisor, Pradygdha Jati (Dygdha), in a week or two. Another IBEKA employee (Umbu Petrus) picked me up from the airport and we drove to a small restaurant to eat a fish curry with rice and tempeh. It was delicious! The restaurant had AC which felt amazing because it was hot and humid outside. We then began our drive to the village. The roads were rough so it took us almost 4 hours despite it being only 20 miles away. At first we were amid tropical trees with papaya, bananas, and coconuts, as well as a couple rice paddies, but we soon entered a region much like the savannah in Africa with only a couple of trees and miles of yellow grasses. Motorbikes sped by us and would purchase diesel in liter bottles that were set out in front of people’s homes. The village I was staying in was Kamanggih and was thankfully located in the hills on the island which were cooler. I was incredibly shy and scared when I first arrived. I felt out of place. I was only a student and yet these people had brought me to their home. How was I going to help them? Why was I there? These people were perfectly capable of solving their own problems without me. I felt lost. After a warm meal of rice, tofu, and veggies, I went to bed restless and confused. 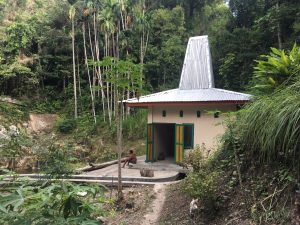 In the following days, I slowly started to feel at home in the village as I walked around with the English teacher, Rambu Nita, as my guide. I walked the village asking about her life and meeting with the different villagers. I was fascinated by anything and everything and my questions poured forth. We looked down wells, talked to villagers about their biogas stoves, examined the PVC pipes that distributed water to all of the homes, looked inside the giant water reservoirs, observed the wind turbines at IBEKA’s Knowledge Center, helped the operator turn on the fresh-water pump, carried water from the river up a hill, and visited the 25 kW micro-hydropower plant. It was a dream! I started off my mornings by reading about Indonesia’s history or technical reports on micro-hydropower, drip irrigation, solar panels, and pumps. In the afternoons, I would walk with Rambu Nita to ask questions or see the beautiful landscape. I soon became conversational with Indonesian and could converse with some of the villagers. I also killed a chicken and ate fresh papaya and coconuts.

When my partner arrived a week later, I was excited to share with him the natural beauty of the village and the community I had found there, as well as begin work on our project. Our internship advisor had mentioned a wind-powered drip irrigation system, but as we talked to the IBEKA employee in the village, we learned that some houses still didn’t have pumped water. We decided that this problem was more pressing than the other so we created a survey on villagers’ water needs and uses to figure out how much water was needed and how it affected their incomes. We then spent the week visiting homes that did not have pumped water with Rambu Nita and asking them the questions on the survey. We would sit on a mat and they would offer us betel nut, sirih, and crushed limestone that the villagers would chew and spit. Rambu Nita would then translate our questions and the villagers answers. It was incredible! We would put the data into a spreadsheet later in the night. We also visited another micro-hydropower plant (69 kW) and a couple more biogas digesters. After two and a half weeks in the village, our internship advisor advised we meet him in Jakarta because we would be able to prototype a design solution. So we packed up our belongings, said goodbye to our new friends, and flew to Jakarta. 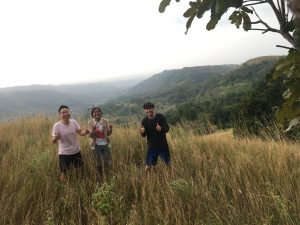 We were sad to leave, but also excited to go to Jakarta. Jakarta was the capital and therefore a center for Indonesian culture. Furthermore, we were going to meet our internship advisor and the directors of IBEKA! When we arrived, our advisor (Dygdha) took us to get Padang food, small plates with rice, and we ate until we were bursting. We then went to the office, met the other office workers who were in their late 20s, and then to the house of the director. We stayed in a house across the street that they were renting and thankfully had AC. However, the house of the directors was not air-conditioned because it used too much electricity.

In the morning, we ate a breakfast of rice, tempeh, and mango, and then walked to the office. We were briefed by Dygdha and the financial manager of IBEKA on IBEKA’s process of inspiring community action. We then worked with Dygdha to select a design problem. We realized that a new pump was too large of a project for us to complete given our time and distance, so we brainstormed smaller problems in the village and then selected one. We decided to work on solving the problem of remote electricity access since some homes were still too far to be economically connected to the local grid. We were lost at first, but I used my experience from EGR101 to help lay out a plan for how we would approach solving the problem. We began by researching and gathering all the information we could about different energy sources and the island. We then set design criteria, brainstormed solutions, evaluated solutions, and chose a solution to work on. Our proposed design solution was a small vertical axis wind turbine that villagers could build themselves. We constructed a 3D model in Fusion 360 (a CAD software) and performed some computational analysis on it to see if it would break. We bought a couple materials to start prototyping it, but we only had a couple of days left and didn’t have enough time to construct a complete prototype. We hope to construct a prototype this fall with another group of students so that they can take it to IBEKA and test it. We also have met with Bryan Koen in the energy initiative about making this project a club with students interning each year with IBEKA. 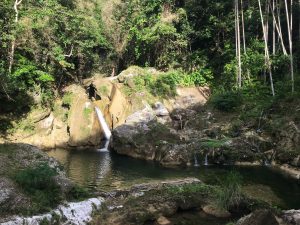 I haven’t even talked about the directors (Ibu Mumpuni and Pak Iskandar) and what I learned from them. They had started IBEKA in 1997 and had moved on from staying in the villages to conversing with politicians and spreading their message to all of Indonesia. I will never forget their mission. We would talk to them about IBEKA and their work over dinner, trying to understand how they had built over a hundred micro-hydropower plants, how they got them to be maintained, and how they were spreading their message. We learned that their goal wasn’t just to provide electricity to villages. Their true goal was to empower villages to become self-sustainable. To produce the end product in the village rather than having foreign companies come and strip Indonesia of its raw natural materials. They explained how the village would care for the land because it was their livelihood in contrast to the foreign companies that left it unusable after exploiting all of its resources. They then explained that to move industry to the village, the village needed access to basic resources such as electricity, paved roads, food, and water, which is what IBEKA worked to provide villages. However, they only helped the villages construct the resources and wouldn’t help villages that wouldn’t work with them or make a commitment to maintaining it. 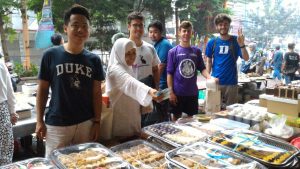 From my experience in IBEKA, I understand now how difficult the problem of energy is. Although the villagers had access to a fresh-water pump and a micro-hydropower plant, only a few of them knew how to operate it; the operators had been trained under IBEKA. IBEKA was the sole source of information for the villagers; they didn’t even have a library. The school we visited had computers, but only for the teachers to use for grading. The access to information in the village was scarce, which inhibited their ability to learn about engineering and be able to solve their own problems. The only way they could be solved was if their child became an engineer in college or if IBEKA offered to help. Additionally, environmental challenges further endanger the village. The island of Sumba used to be called ‘Sandalwood Island’ because of all the sandalwood trees, but because of years of deforestation, its terrain is now a savannah. This deforestation, along with climate change and other ecological factors, has decreased the amount of rain on the island as the wet season has decreased from 6 months to 3 months. With less rain, farmers grow less crops and become poorer and malnourished. Furthermore, the villagers rely on streams and rivers for drinking and for electricity, but these become threatened as the amount of rain diminishes. And if ecological challenges weren’t enough, the employees at IBEKA had to deal with corruption and disengagement at every corner. The politicians asked for bribes, the funding sources would only pay for the resource and not for community training, and the leaders in the village would steal funds from the village cooperative that managed the resources. In all, it’s not going to be one thing for the energy poverty challenge to be solved. A whole boatload of problems need to be confronted, and it will take each sector doing their part to solve this major issue.