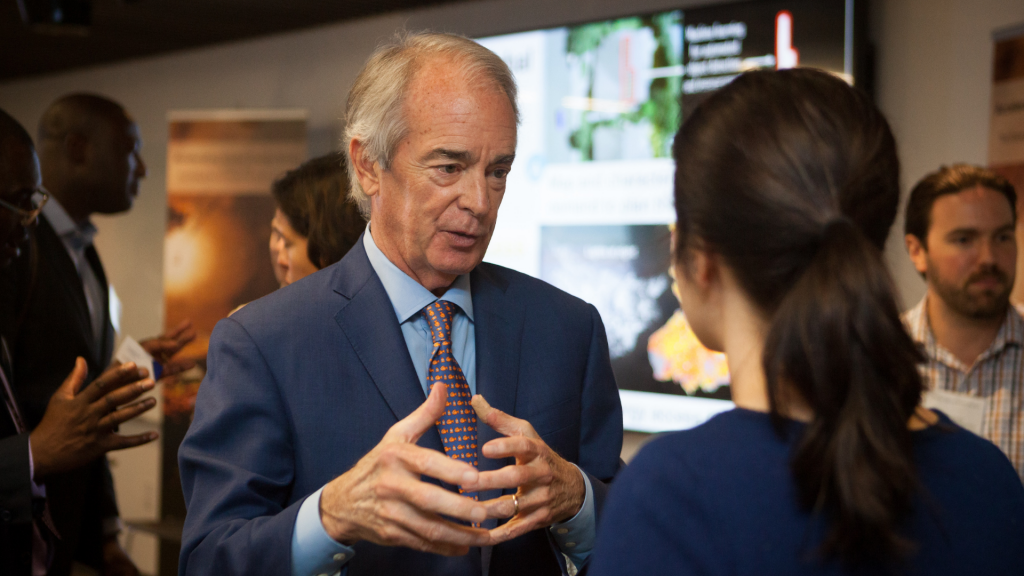 In developing countries, access to modern energy has far-reaching effects on economic opportunity, well-being and even emissions of the greenhouse gases that cause climate change. A new gift will redouble Duke University’s efforts to develop policy and market solutions at a critical moment of recovery and potential transformation in these markets.

The Energy Access Project at Duke (EAP) has received a $3 million gift from M.A. Rogers to expand its work. EAP was established in 2017 through an earlier gift from Rogers and her late husband, Jim, the former CEO and chairman of the board of the electric utility company Duke Energy. The program will adopt the new name of the “James E. Rogers Energy Access Project at Duke” in his memory.

“Jim believed that solving global energy poverty is essential to building a more equitable and sustainable world,” said M.A. Rogers. “He brought to Duke his philosophy of building bridges and gathering talented people together to solve this tremendous challenge. And now seeds that he planted years ago have become a model for how universities can use the power of partnership to mobilize the ideas and resources needed to solve big challenges. Jim would smile knowing that this Project now bears his name.”

Worldwide, hundreds of millions of people do not have basic electricity, and those ranks swelled in 2020 as the COVID-19 pandemic hit the planet’s most vulnerable especially hard. Billions more—concentrated largely in Africa and South Asia—lack access to energy systems that can power healthy, productive communities. Women give birth in hospitals by candlelight, vaccines spoil without proper storage, and unreliable grids keep businesses from competing in the global economy.

Jim Rogers worked with Duke University over more than a decade to develop partnerships and identify opportunities for making progress on these energy challenges. He was an original board member of the Nicholas Institute for Environmental Policy Solutions and later became an inaugural Duke Rubenstein Fellow after stepping down from Duke Energy. His passion for expanding energy access inspired countless Duke graduates who work in this domain today, including many who took part in graduate and Bass Connections courses that he co-taught during his fellowship.

“Jim Rogers was a one-of-a-kind visionary who saw how changing technology and ways of doing commerce would make it possible to light the world for those who still live without power,” said Tim Profeta, founding director of the Nicholas Institute. “Naming this project after Jim allows us to recognize him and his legacy, and to honor the leadership that he so generously and enthusiastically gave to Duke, and the world, on this essential challenge.”

In a short time, EAP has positioned Duke at the center of a broad network of scholars and practitioners. The program connects more than a dozen Duke faculty and staff with more than 30 close collaborators through the EAP Affiliates program, nearly 150 scholars through the Sustainable Energy Transition Initiative and countless students.

“There are no quick, easy fixes to entrenched energy poverty,” said EAP Director Jonathan Phillips, who leads the program’s applied work and engagement. “But through building the evidence base, raising up key voices and partnering with the people and organizations on the front lines of this challenge, we’re supporting important progress.”

EAP has also emerged as Duke’s educational hub for students who want to engage on this issue. The program sponsors the Energy in Emerging Markets Case Competition each November as a centerpiece of the annual Energy Week at Duke. Hundreds of graduate students from around the world participate in the competition each year, and it has attracted some of the leading companies in the sector.

Courses—including those offered through real-world, problem-based learning in the Bass Connections program—have allowed students to build the skills and understanding to pursue careers in energy and development. As just one example, an interdisciplinary team of students and faculty partnered with the government of Ethiopia and other stakeholders over the past academic year to help determine the viability of solar mini-grid irrigation systems for different rural sites based on the potential of improved agricultural productivity and sustainable water supply. The Rockefeller Foundation is now moving forward in supporting the development of these pilot sites.

“This course is a perfect example of the practical and globally relevant learning that EAP endeavors to support”, said EAP Faculty Director Marc Jeuland, who leads educational initiatives and builds the research network. “Students have a chance to help solve real-world energy access challenges, working with faculty and other researchers and interacting with a broad set of stakeholders from the public and private sectors, as well as donors.”

In addition to unproductive agriculture, the program is researching other ways that energy access can unlock transformation, such as engaging with the World Health Organization on the lack of reliable electricity for health facilities in sub-Saharan Africa. Another core area of work is establishing the vision and programming to finance modern, low-carbon energy systems. And as the benefits of expanded energy access accrue, EAP is exploring ways to ensure they are distributed equitably, particularly across genders.

Looking forward, the program aims to focus on clearing bottlenecks to effective deployment of climate finance commitments that developed countries have made under the Paris Agreement. EAP is also developing methodologies to enable the rapidly expanding ranks of carbon market investors to fund projects that achieve important co-benefits, such as cooking technologies that also reduce the amount of time women spend gathering firewood.

“Scientists, engineers, economists, policy experts and other scholars across Duke University are making substantial contributions to the transformation of energy technologies, policies and systems in the United States and throughout the world,” noted Brian Murray, interim director of Duke’s Nicholas Institute and Energy Initiative. “Through the James E. Rogers Energy Access Project, Duke experts and our global partners can advance development of timely, viable pathways for low-income countries to generate energy and improve lives while minimizing new carbon emissions.”