Net Zero may be coming. But America is a fossil fuel bank to the developing world today. 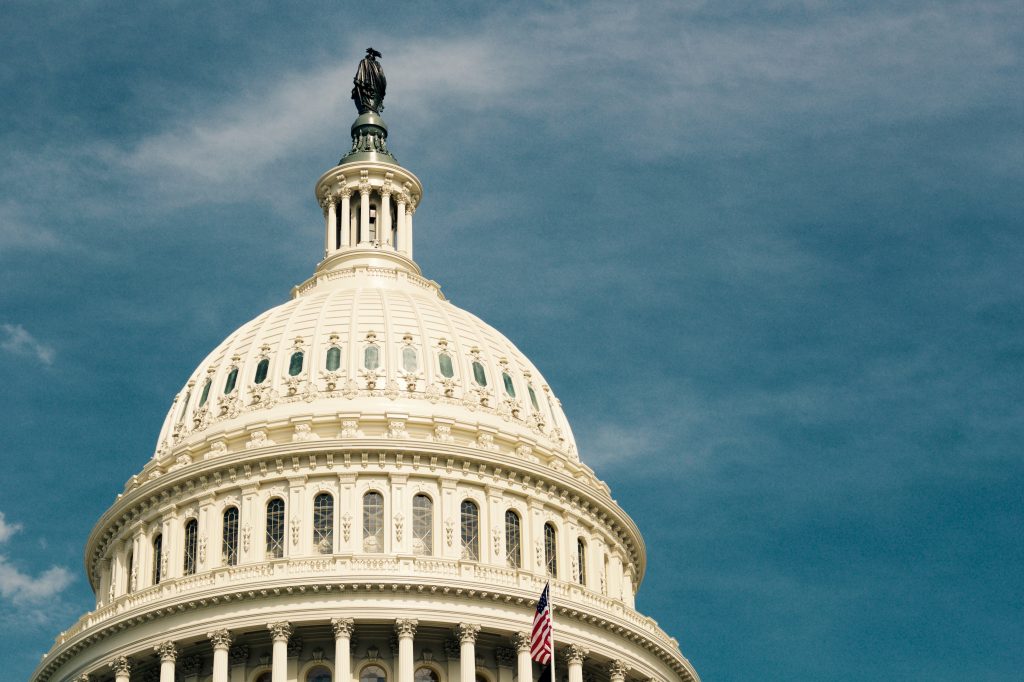 President Biden’s recently announced international climate finance plan is all about mobilizing resources to help developing countries grow their economies and build resilience, all without wrecking the climate. On its surface, it is a restatement of an essential theme of the Paris Agreement, and another sign that the U.S. is re-engaging in basic climate diplomacy. As a practical matter, however, Biden’s plan represents a fundamental re-orientation of how the U.S. directs investment into developing nations because of where the U.S. is starting.

While China and other state-sponsored lenders in East Asia have grabbed headlines for their leading roles in financing overseas fossil projects—especially coal—the U.S. government stepped up its own financing of oil and gas development, transport, and power projects around the world during the Trump administration. Today, America’s overseas investment portfolio is far more strongly weighted toward fossil fuels than renewables and other low-carbon energy sources. Its financing tools and strategies are fit for this purpose. With investments commonly having repayment periods of 10-20 years—and far longer operational lifespans—it’s likely to take many years to shift that overall weighting toward low-carbon assets, and many more to achieve Net Zero ambitions.

From fossil finance to climate finance

“Climate finance” is an umbrella term that describes a broad set of investment opportunities in the developing world that reduce greenhouse gas (GHG) emissions, capture them, and/or increase the resilience of human and ecological systems to the negative impacts of climate change. Agriculture, forestry, and other aspects of the economy are very relevant to this conversation—especially once we start to consider adaptation—but the energy sector is central. It’s responsible for nearly three quarters of global GHG emissions. And since non-OECD countries will be the source of almost ALL the world’s growth in energy demand over the next two decades, the development pathways of poor countries—and the financing underpinning them—becomes critical.

The U.S. has several agencies with tools for mobilizing capital to invest in emerging markets—including the US Agency for International Development, the Millennium Challenge Corporation (MCC), and the Export-Import Bank (Ex-Im)—as well as having influence in key multilateral finance institutions like the World Bank. However, the institution under its direct control with the greatest capacity to boost investment is its development bank, the U.S International Development Finance Corporation (DFC). With a $60 billion investment cap, the DFC works with the private sector to provide debt, equity, and insurance in key sectors, in the process de-risking projects and catalyzing far more additional private sector investment alongside it.

Based on analysis of publicly available project-level data compiled in May 2021, the DFC held $6.2 billion in fossil energy investments, as compared to $5.9 billion in renewables and related “green” investments. Another $0.6 billion is invested in a range of multi-sectoral funds and portfolio guarantees that support energy development, among other things. Nearly 70% of the DFC’s current fossil investments were made under the Trump administration between 2017 and 2020. 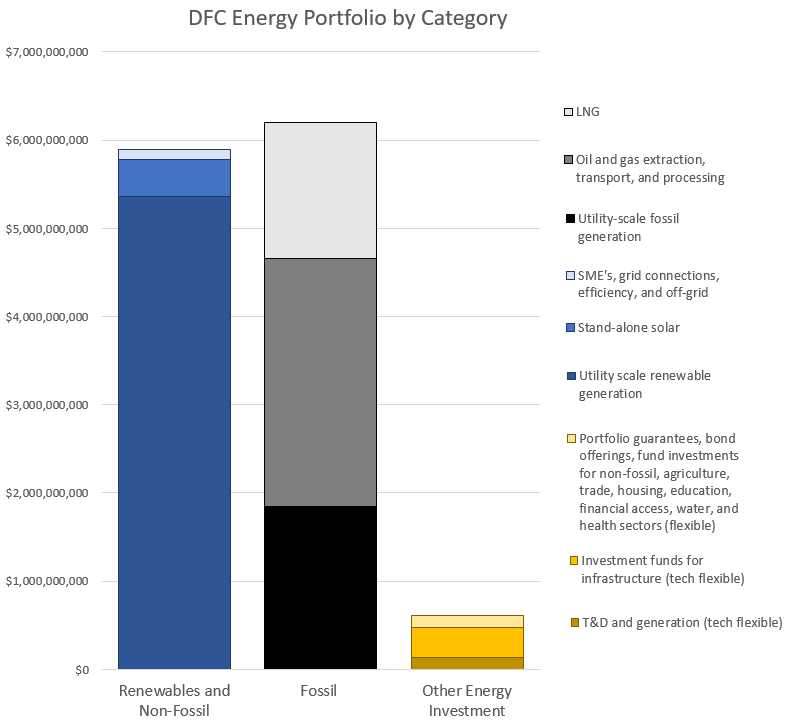 Source: Based on analysis of all active projects in DFC’s portfolio with data current through Dec 31, 2020.

It is worth noting that the majority of the DFC’s fossil investments do not support power sectors in developing countries, which is typically the axis of the policy debate around government financing of fossil fuel projects. Less than a quarter of the DFC’s fossil investments—about $1.5 billion—are to support power sector development in low- and middle-income countries (LMICs) struggling with energy poverty. Far more investment supports upstream oil and gas development and transport, including in wealthier countries like Oman, Argentina, and South Africa, spawning legitimate questions of whether the agency is veering from its mission of supporting growth in the world’s toughest and least-served markets.

Project-level financing data is not available for other key US agencies providing overseas energy financing, which is a problem. What data is available shows an even heavier weighting towards fossil. The US Export-Import Bank (Ex-Im)—whose mandate is not development but which still provides billions to support U.S. businesses expanding into frontier markets—increased its oil and gas exposure by $2.5 billion in 2020, and approved more than $5 billion in fossil investments since 2018. Ex-Im’s current $12 billion oil and gas exposure is more than four times its investments in the power sector, a subset of which includes clean energy transactions. MCC, with its powerful tools for transforming the policy environments in countries, is currently investing more than $2 billion in the African power sector alone, but it is unclear how resources are distributed across fossil and renewable generation, transmission and distribution networks, and capacity- and sector-building activities. 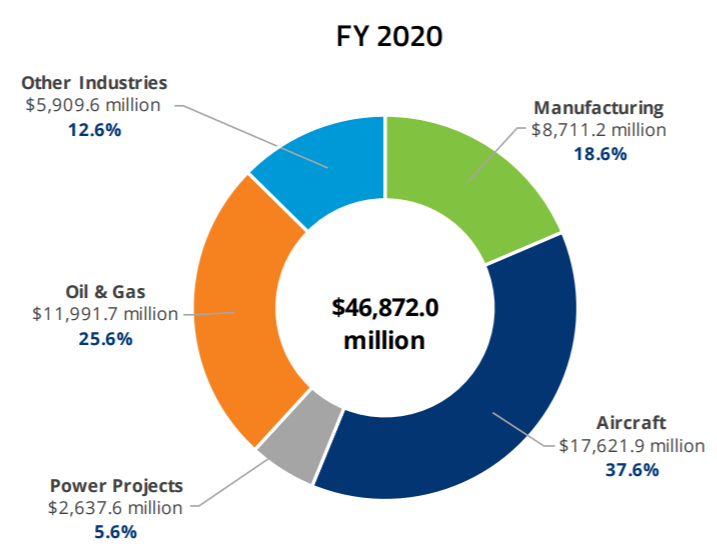 Net Zero is fragile; transformation will require new approaches and working across institutions

In the world of infrastructure financing, 2040 is tomorrow. A 20-year loan made today, for example, will remain on the DFC’s books until 2041, absent some major issue with the project or an affirmative action to exit the investment. So the fact that so much of the DFC’s fossil investments were made so recently—and are therefore relatively new, long-term positions—means the agency will be carrying a significant carbon load well into the next decade. This weighs heavily on the implementation of the DFC’s new Net Zero by 2040 pledge—the earliest such target for any DFI from a G7 or G20 country. And with the agency remaining open to financing new carbon-intensive investments through 2030, it may not see much of the carbon rolling off its portfolio until the final years before the 2040 goal kicks-in.

All this to say, Net Zero goals are fragile, whether in the corporate world or in government. A future administration less committed to climate could blow-up the Net Zero commitment by financing a single long-term fossil project. (Of course, Congress could bind the agency to Net Zero by codifying the commitment into law, but that seems unlikely in the near-term.)

The fate of the DFC’s carbon profile—and the effectiveness of the U.S. government in opening low-carbon development opportunities in LMICs more broadly—rests more with the success of the programs behind the Net Zero commitment. The financing tools and strategies in America’s repertoire today are fit for a different purpose than the ones required to implement Biden’s vision.

Whether the U.S. is able to upgrade its climate finance machinery to deliver at the scale envisioned depends on many questions. Will USAID’s climate strategy, due in November, aim to prepare projects and sectors for transformation and large-scale debt investment? With utility-scale renewables representing low-hanging fruit (much of it harvested), will the DFC be able to scale-up financing in more challenging sectors like off-grid and adaptation, the latter of which is far less commercial and requires innovative blending strategies? Can Big Philanthropy leverage its risk-tolerant capital to fill gaps, seed big ideas, build project pipelines, and align visions across countries? Can the Treasury Department and MCC help structure the policy frameworks and enabling environments so the private sector is able to bring multiples of additional investment? Can the U.S. government’s human capital—scattered across agencies with differing missions, tools, and incentive structures—be coordinated at the level required to execute such a campaign?

More to come on these and other essential questions.